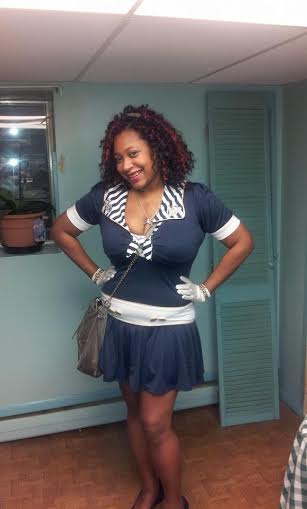 Ciera Stanley doesn’t let her HeartMate II LVAD stop her from looking fashionable.  After receiving her implant in December of 2013, the twenty eight year old developed an ingenious method of modifying her clothing that allows for and hides the equipment that keeps her heart pumping.

Here is her video showing how she alters her clothing to adapt to her VAD equipment:        https://www.dropbox.com/s/ms17t7o4uprdrkx/lvadvideo.wmv?dl=0

In September of 2013 I began feeling  short of breath and would have to stop frequently when walking for work or commuting.  Using stairs was always daunting, but it was manageable.  I was moving slower and slower, and Halloween night of 2013 I could not sleep lying down.  I was only comfortable  sitting straight up because there was so much fluid on my chest.  That night I went into the ER for help and was hospitalized.  After a months stay I was informed that I would need either an LVAD or a new heart.  I was discharged but returned two weeks later and  stayed for another two months  awaiting my surgery.

I received my Heartmate II pump at Johns Hopkins on Dec. 20, 2013 and was discharged from the hospital two weeks later.  The whole time I was in the hospital I stayed pretty upbeat, choosing to focus on the positive and making jokes rather than let my situation get me down.  After a month and a half of recovery, I got back to most of my daily activities including socializing with friends, going to church and even dating.  As a 28 year old I’d rather have my wires tucked away when out on a date, so I have employed the use of over sized bags just like ones I had owned before, but this time they are filled with my batteries and my controller. On days when I am just running errands or hanging with friends and don’t have to worry about my wires being compromised, I simply wear my batteries on my waist along with my controller.  For the most part people don’t really notice them or ask me about them and are completely shocked when I explain what they are.  For me, dressing the way I dressed pre-vad keeps me sane.”